A shark is a type of fish. It has a very large size. It is also featured in many Hollywood movies as a dangerous fish (according to movies sharks love to drink human blood). A shark is also an element in Little Alchemy 2. That’s why many people try to make a shark in little alchemy 2.

But many of them, don’t know the steps of making a shark. If you are one of them, this article is for you. For the making of a shark, first, we have to make a fish and blood. In this article, we will tell you, step by step that how to make a shark in Little Alchemy 2.

Steps to Make a Shark in Little Alchemy 2:

Before telling you about the steps, we want to tell you something about the making of a shark. For making a shark, first, we have to make some things, for making a fish and blood. Then at the end, we will mix the blood into the fish to make a shark. Follow the below-mentioned steps!

Video Tutorial on how to Make a Shark in Little Alchemy 2:

Also Read: How to Make a Sewing Machine in Little Alchemy 2? | Step by Step Guide! There are 4 states of matter (solid, liquid, gas, plasma), and gas is one of them. It makes with atoms. Nowadays, it is used … A cookie-cutter is a tool that is used in the making of cookie. Basically, a cookie cutter is made with metal, it is used … 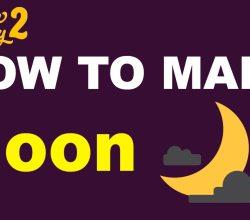 Moon is one of the most beautiful things that we see at night. Many people love to see the moon in the evening. A …